Creativity and Variability: Prosody and Information

Creativity is one of the defining features of human interaction. Linguistic creativity may manifest itself in terms of innovative novel forms and/or in the suppression and eventual abandonment of existing structure in a language. In this respect, phonetic and prosodic variation might be considered linguistic creativity. It also shows the production of novel forms that are either discarded or subsumed into a general analysis based on the most frequent forms. Such variation has also been found in the prosodic marking of information-structure making it especially difficult to determine the deviant vs. convention status of a form. Such phonetic and prosodic variability may result from a number of factors including but not limited to speaker, context as well as linguistic and dialectal structures. Yet, there are few existing attempts aiming to model this variation. Empirical studies generally do not clarify the processing of a novel and ‘deviant’ form in contrast to a ‘canonical’ or ‘non-deviant’ form in their data.

Topics and areas of interest

The areas of interest for this workshop pertain to the following research questions:

It will be a two-hours (16:00-19:00 CET) workshop comprising talks of 15-minutes (plus 5 minutes for Q/A). This is a tentative schedule subject to change on the basis of the number of submissions and accepted abstracts. The workshop is intended to offer only oral presentations. 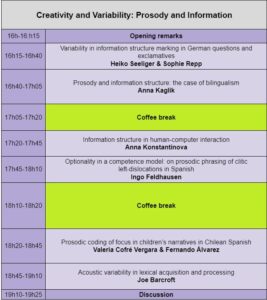